William Courtenay “Bill” Davidson died Sunday morning, Nov. 10, 2013,
at Greenfield Senior Living of Oak Ridge, where he had resided for a
short time.

The son of Mary Ann and the late Jackson B. Davidson, Bill was born in
Oak Ridge in 1954 and attended Cedar Hill Elementary, Jefferson Junior
High, and Oak Ridge High School, from which he graduated in 1972. He
was active in Scouts and received the Order of the Arrow. He attended
Eckerd College in Tampa, Fla., and later graduated from the University of
Tennessee with honors and a major in French.

He was preceded in death by his father and his sister Anne Courtenay
Davidson; also six uncles, Nathaniel (and his wife Mary), Robert,
William, Hugh (and his wife Loretta), and Lee Davidson and William H.
Courtenay.

William Courtenay “Bill” Davidson
Survivors include Bill’s mother; his sister Adele S. Davidson of Gambier, Ohio; his uncle, Thomas A. Courtenay of Shelby County, Ky.; and three cousins with their families: Anne S. Davidson, Julie and Glenn McCaffrey, and Diane Cook and the late R. Fred Cook Jr. Bill lived most of his life in East Tennessee, but also spent time in Washington state and had good friends in the Northwest. In his earlier years, he enjoyed traveling and worked in Scotland and Crete;
his time working in a restaurant resort in Ullapool, Scotland, was one of his favorite experiences. He worked in landscaping, restaurant work, and (briefly) broadcasting.

In recent years, he attended First Presbyterian Church of Oak Ridge and faithfully helped out with washing the dishes at the church’s Wednesday night suppers. He also participated in the church’s guitar group and donated his piano to the church. He loved music, art, and poetry, and devoted much of
his time to painting. He was an avid reader of The New Yorker—Alice Munro was a favorite author—and Poetry Magazine. He enjoyed reading his French Bible and listening to French stations on shortwave radio, gardening, camping, and barbecuing; he looked after his mother and enjoyed raking the fall leaves in her yard. He practiced yoga with a local group. He was a member of the local chapter of the National Alliance for the Mentally Ill.

Loving and giving in death as well as in life, Bill donated his brain to the McLean Hospital Brain Bank in Cambridge, Mass., for research into causes of schizophrenia and other brain diseases.

Memorial services will be held at First Presbyterian Church of Oak Ridge on Wednesday, Nov. 13, at 2 p.m. following burial in Oak Ridge Memorial Park at 1 p.m. The family will receive friends at the church after the service.

The family wishes to express its deepest gratitude to Bill’s caregivers in his illness
Posted by S. Courtenay at Thursday, February 16, 2017 No comments:

History of the House of Courtenay - Col. Courtenay Bath England 1812 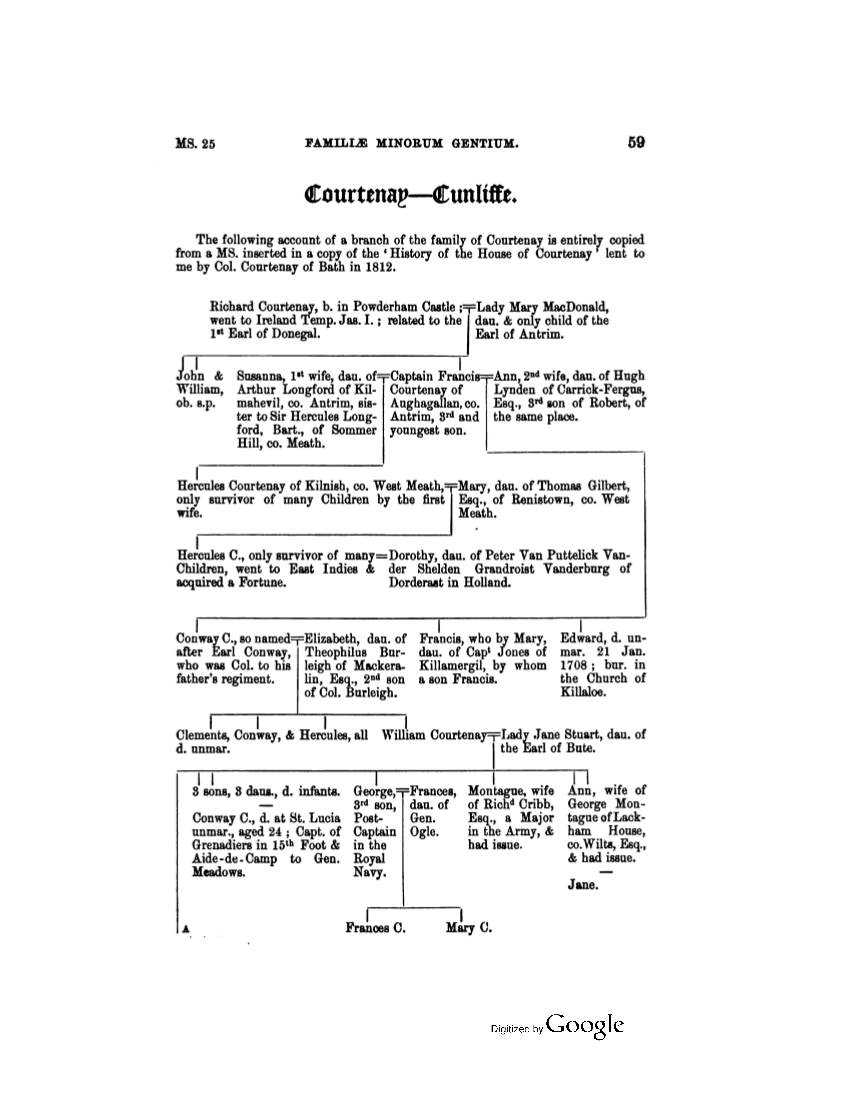