Henry I, King of France, m. Anne of Russia.

Lord of Hereford, Constable of England.

Oliver Wolcott, 1760-1833, Secretary of the Treasury under Washington and

Governor of Connecticut, 1817-27. His brother Frederick Wolcott was a member
of the Connecticut Senate, father of Joshua Huntington Wolcott, whose son,
Roger Wolcott, 1847-1901, was Governor of Massachusetts, 1896-1900.

A Brief History of Courtenay Manufacturing Co. and the Village of Newry by: John L. Gaillard, Newry, SC December, 1994

William Courtney was born in Ireland in 1756.  He came to
this country and settled in Morristown, N.J.

He serves his country for five years in the War of the
Revolution under the command of Anthony Wayne, known as “Mad”
Anthony. He was a private in the Pennsylvania Regulars and was in
several battles among which was the taking of Stony Point
where Gen. Wayne distinguished himself as a brave leader.

Mr. Courtney married Mary Chamberlain about 1786.  They
had ten children all of whom lived to years of maturity.
He was a butcher by trade and also doctored horses and cattle.

After the war he moved to Unadilla, N. Y. and lived there
several years afterward moving to the town of Marathon, N.Y.
This was about the year 1813 or 1814.   In or near the year of
1815, he was on a visit to some of his children in Unadilla
N.Y. and came to his death by drowning in the Unadilla river on
June 2, 1817, and was buried in Sidney, N.Y.
Mary died in Sept. 1840. She is buried in Texas Valley, N.Y.
with her grandson William.

Note regarding Robert Courtney above: Robert was born on May 9, 1791 in Unadilla, N.Y.  He married Catherine Abraham Fuller.  Robert died on Nov. 29, 1842,  place ?  Robert was buried in Pioneer Cemetery in Sidney N.Y. 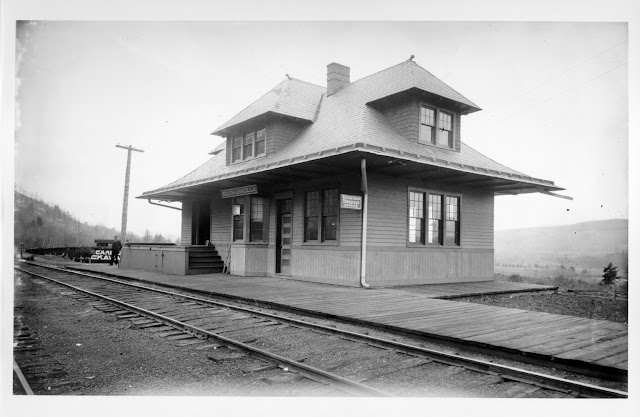 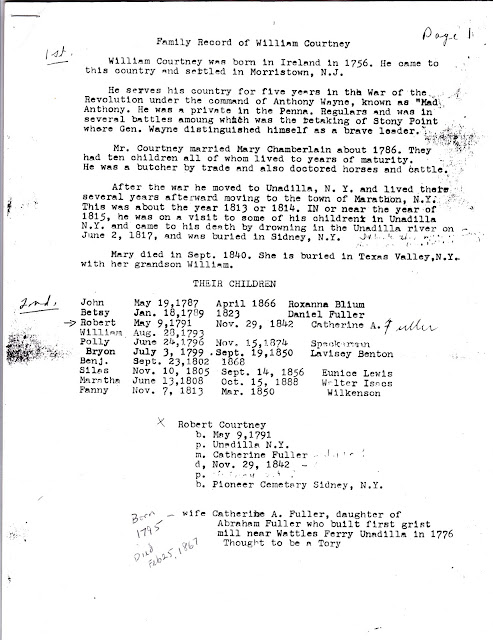 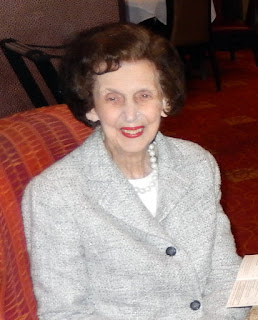 Ruth Carolyn Carpenter was born on October 8, 1925. Carolyn was the long-awaited child of the Honorable Carl Edward and Ruth Spencer Carpenter of Gastonia, North Carolina. Carl, a NC State Senator and Gastonia attorney, passed away when Carolyn was four years of age. She and her mother were then cared for by her father's many brothers, until they moved to Charleston in 1936, a city for which she held a lifelong love. Carolyn graduated from Ashley Hall in 1944, then attended the College of Charleston where she majored in English and pledged Delta Delta Delta. Carolyn met the love of her life while attending a summer camp. She later married St. John Courtenay, Jr. of Greenville, South Carolina on October 6, 1951. They lived in Columbia, South Carolina, before moving to Greenville where they had their first child, St. John Courtenay, III. In addition to St. John III, they were the parents of Anne Spencer Courtenay and William Ashmead Courtenay, II. St. John later accepted an engineering position, first at Chemstrand in Decatur, Alabama, and later at NASA in Huntsville, Alabama, where they relocated their family in 1972. Carolyn was a faithful, lifelong Episcopalian. Known for her kind demeanor, she served as the church secretary at St. Philip's Episcopal Church in Charleston, and was a member of the Altar Guild for decades at St. John's Episcopal Church in Decatur and later at the Episcopal Church of the Nativity in Huntsville. She was also a member of the Episcopal Church Women, the League of Women Voters, and the D.A.R. Having been an avid bridge player, Carolyn's children loved to come home from school on the days she hosted the bridge luncheon, to enjoy her home cooked delicacies. After the untimely death of their son, Ashmead, in 1973, Carolyn began her career as a librarian at the Huntsville-Madison County Public Library. She later became the manager of the Eleanor E. Murphy Branch Library, serving in this capacity until she was 82 years old. Honoring 33 years of service, Carolyn's retirement party in 2007 was a celebration by her many friends, family, colleagues, and library patrons who expressed their thanks for her many contributions and kindnesses bestowed upon them during her tenure. Carolyn loved her work and her many loyal patrons, known as the Friends of the Library. After retirement, Carolyn enjoyed D.A.R. membership meetings in Huntsville, her favorite Bible Study with close friends, and attending monthly luncheons of the Huntsville Republican Women's Club. She and St. John enjoyed their years as "Nana" and "Papa" to Courtenay Mason Davis and Jeffrey Clifton Davis, Jr., their beloved grandchildren. In February 2016, they became great-grandparents to Sarina Mason Ahuja, little daughter of Courtenay and Anand Ahuja. Also, in May 2016, Carolyn and St. John relocated to Murfreesboro, Tennessee, where they were regular attendees at St. Paul's Episcopal Church. Carolyn moved her D.A.R. membership to The Colonel Hardy Murfree Chapter. Carolyn was pre-deceased by her parents, Ruth and Carl Carpenter, her son William Ashmead Courtenay, II and her daughter-in-law, St. John III's wife, Dianne Phillips Courtenay. She is survived by her husband of 66 years, St. John, their son, St. John Courtenay, III and Beth Gochrach, daughter, Anne Courtenay Davis and son-in-law of 37 years, Jeffrey Clifton Davis, and their children, Courtenay Mason Davis Ahuja and her husband, Anand, their daughter, Sarina, of Hoboken New Jersey, and Jeffrey Clifton Davis, Jr. and his wife Nandini, of New York City. Arrangements: Funeral Service was held on Monday, October 9th with Graveside Service was Oct.11th at Woodlawn Memorial Garden in Greenville SC. Memorials may be made to: Episcopal Church of the Nativity 212 Eustis Avenue Huntsville Alabama 35801 The Huntsville-Madison Public Library 915 Monroe Street Huntsville AL 35801 An online guestbook is available for the family at www.woodfinchapel.com. Woodfin Memorial Chapel (615) 893-5151
Published in The Huntsville Times (Huntsville AL USA) on Oct. 18, 2017
Posted by S. Courtenay at Friday, November 10, 2017 No comments: